My God Shall Supply All Thy Needs, Part II

So I've been pursuing this internship thing with our local church, but at a meeting last week with the Executive Pastor, it became clear that it would not work out. I won't go into all the details, but the bottom line is that they can't pay me for the work I would do, and aren't really set up to allow me to raise support through their missions program.

This was a bit of a setback, and again, not exactly what I was expecting. But God does not lead us down blind alleys and then simply abandon us - He always has a plan.

Today I had the privilege of attending the change of command ceremony for the Recruit Training Regiment at the Marine Corps Recruit Depot (MCRD), San Diego. 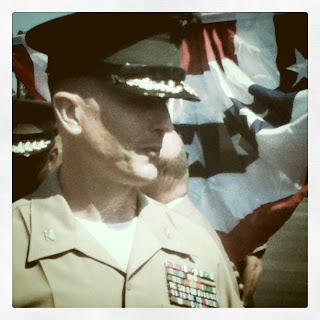 An old friend of mine, Col. Mike Lee, was taking command, and I had been invited to attend. I had previously worked with Col. Lee back in Germany in 2004-05, and considered him one of the finest Marines I had had the opportunity to work with in all my years as a Marine.

As we were standing around waiting for the ceremony to begin, I spied a Navy chaplain standing nearby. He was wearing the Marine service uniform, so I knew he had to be assigned to a Marine command. As it turns out, he is the regimental chaplain - so Col. Lee will be his new boss. As we began talking, something in his mannerisms seemed familiar, and I told him that I thought I knew him from somewhere. As military folk have done for ages, we went back through all the commands we had served at, looking for some common ground. Finally, he said that he had served with the 1st Marine Division back in the late 90's. When I asked which unit, he replied, "1st Battalion, 11th Marines." My old unit! I had been assigned to 1/11 from 1995-1999, and he had been my battalion chaplain during part of that time!

Though we didn't have too much time to talk then, I got his contact information and called him later that evening. I explained where I was in regards to the chaplaincy with the National Guard, and then asked him what he would do if he had an "extra" chaplain at MCRD - could he find a place to use them on a full-time basis? He replied by listing several commands that were understaffed - mainly the med hold units where injured recruits go to recover and rehabilitate from injuries or illnesses. He said there were lots of opportunities for ministries, and that it would be no problem to find real chaplain work for an interested individual.

The only downside is the money. Since there's no "official" position open, my work there would be on a voluntary basis - they can't hire me as a chaplain. Working there could count as drills for the National Guard, but my unit up in LA would have to agree to pay for it - which I doubt they would do on a full-time basis. So, what I may end up doing is partnering with a parachurch organization (like the Navigators) and seeing if they will sponsor me for this ministry - even if it means I have to raise my own support.

So that's where it stands now. The Lord has brought together two individuals in key positions that I have prior relationships with, and has opened the door to a crucial ministry where I can serve to my heart's content. I can start as soon as I'm officially recognized as a chaplain by the National Guard (which should take place on June 19th), so in the next few weeks I'll be contacting various organizations to see about serving with them.

Please keep us in your prayers regarding all of this. Tamara and I both feel that this is a "Divine appointment," but it's always easy to be anxious about things, esp. when it comes to finances. Please pray that He will continue to open doors so that I can provide for my family even as I seek to minister to the Marines.
Posted by Dave Harvey at 8:19 PM

I concur, Col. Lee is the finest Marine I have ever had the pleasure to serve along side.

Great to see how God is leading you, David! We will continue to pray that God makes your path straight in regards to the chaplaincy. Please keep us posted!

Love,
Kay (for the whole Stompede)