I've been watching a show called Top Sniper on the Military Channel recently, and I have to admit that it made me a bit nostalgic. Watching those guys engaging targets with their scoped-out rifles while adjusting to the terrain, wind, and various obstacles made me wish that I could be a part of it.

You see, I love to shoot.

This started back when I was six years old and received a BB gun for my birthday. My dad and I used to go out in our backyard and set up skeet for me to plink at. It was there that I learned the fundamentals of marksmanship as well as how to handle a weapon safely. This would be further refined over the years as I learned to hunt dove, squirrels, ducks, deer, and other wildlife with my dad and brothers in the woods and marshes of Georgia and Virginia. Eventually, the Marine Corps would build upon this solid foundation and teach me to hit a target consistently at up to 500 yards using the open sights of my M-16A2 service rifle. My dream was to one day be assigned to the Marine Corps Rifle and Pistol Team and compete in enough matches to earn the coveted Distinguished Rifle and Pistol badges. Alas, it was not to be...

But that didn't mean I couldn't try.

Since all Marines are riflemen, and since officers are required to qualify with both rifle and pistol, I had ample opportunity to show my stuff on the range on an annual basis. In boot camp, the weeks we spent on the rifle range were my favorite times, if anything can be considered favorable during those hellacious 12 weeks. The reason was simple - on the range the DIs couldn't mess with you - it was just you, your rifle, and the target. No distractions, just you in your own little world. I loved it. Unlike others who worried about getting enough points to qualify, my only concern in those days was to see how high I could score in the Expert category. In fact, at one point I held the range record at Camp Pendleton with a score of 63 out of 65 - a mere two points away from a "possible," or perfect score; a record that would remain unbroken until just a few years ago. Eventually, I would earn multiple awards for consistently shooting Expert with both rifle and pistol - as denoted on the requalification bars on the different badges: 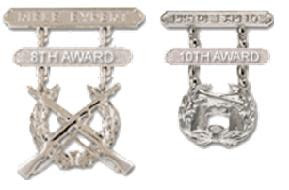 This would be enough for many Marines; indeed, most would be quite proud of this achievement.

But I wanted more - I want to compete in an actual match. I finally got my chance in the spring of 1999 when I heard that Camp Pendleton would be hosting the Pacific Fleet/All Navy matches. I found out that my regiment - 11th Marines - would be putting together a team, and that they needed a "tyro," or new shooter who'd never competed before. After begging my CO for permission, I was granted TAD to shoot with the team. The only problem was that the competition was only a few weeks away, and none of us had much time to get familiar with the weapons we would be using - M-14s for the rifle competition, and .45s for the pistol matches.

Still, we did the best we could with the time we had, and by the time the competition rolled around we were as ready as we would ever be. Among our fellow competitors would be SEAL teams, Recon Marines, and marksmanship units from other services. Quite an impressive lineup. In the end, though, our team would go on to take first place in the team matches for both rifle and pistol, have our pictures taken for the base newspaper, and I would earn an individual bronze medal for the Excellence in Competition (EIC) pistol match.

Sadly, those glory days are long past. To add insult to injury, as a (future) chaplain I am forbidden from even carrying a weapon, much less shooting one - not even in training. It may not seem like much, but this was a hard thing for me to give up - to sacrifice on the altar as it were. But, I know that I'm answering a higher calling and that certain desires must be set aside in order to accomplish the mission that God has set before me. I don't regret it - not even a little bit - but I still feel a longing as I watch the show and wonder what might have been if I had pursued a different path.

I think I would've made a pretty good sniper.

But, I have to admit, I'm pretty pleased with the fact that the Army at least allows me to wear my EIC badge on my new uniform - I figure it lets the troops know that I'm not a complete pogue. :)
Posted by Dave Harvey at 1:43 AM 5 comments:

It Could Always Be Worse...

Well, it's been a little more than two months since my accident and I have to admit that my recuperation is progressing well, albeit slowly. But even with all the support of my family and friends, there have still been days where I've found myself frustrated, anxious or depressed about my injuries and the length of time it will take before can return to full duty. Sometimes the emotions were so strong it was almost overwhelming, and I would find myself engaging in self-pity, wondering why all this had to happen. I imagine it's pretty easy to feel that way when you're the only one you know with injuries like this.

That all changed for me last week.

I was down at Balboa Naval Hospital for another session of occupational therapy, and noticed the guy sitting next to me at the table. Like me, he was doing some exercises with his injured hand in an effort to increase its flexibility. In an effort to strike up some conversation I asked him what had happened. He responded by lifting the sleeve of his T-shirt, revealing an ugly-looking series of scars and skin grafts that wrapped around his upper bicep. It turned out that he too had been involved in a motorcycle accident, except in his case he had been forced into the guard rail which resulted in the muscles of his right arm basically being stripped off. Though the surgeons had been able to reattach them, there was still a significant amount of nerve damage. He could still move his fingers, but his hand hung limply from his wrist. He said the doctors would eventually have to fuse the wrist so that he'd at least be able to have some use of his hand.

As I was considering my own injuries in light of this fellow's circumstances, I happened to notice another young man entering the therapy room. Like me, he was in a wheelchair; unlike me, I saw that he would never leave it. You see, both of his legs had been amputated at the knee - one above and one below, and his right arm was encased in a cast from his elbow to his fingertips.

I didn't get an opportunity to hear his story, but the effect it had on me was profound. Though my injuries are the worst I've ever experienced in my life, they pale in comparison to what others have to deal with. My prognosis is good - the doctors are confident that I'll eventually walk and run again, and will regain full (if somewhat limited) functionality in my wrist. It all came home to me - in a way that it never had before - that it all could have been so much worse. I could easily have been either of those two guys in the therapy room, or even worse. By God's grace and mercy I only sustained a few broken bones, neither of which were life-threatening, and which (hopefully) won't seriously impact my life or future plans beyond this year, Lord willing.

Oh, I still get frustrated from time to time - but it's not the same as it was before. Instead, I find myself focusing more on finding things to be grateful for.